Build a bridge (Ride horses over it) 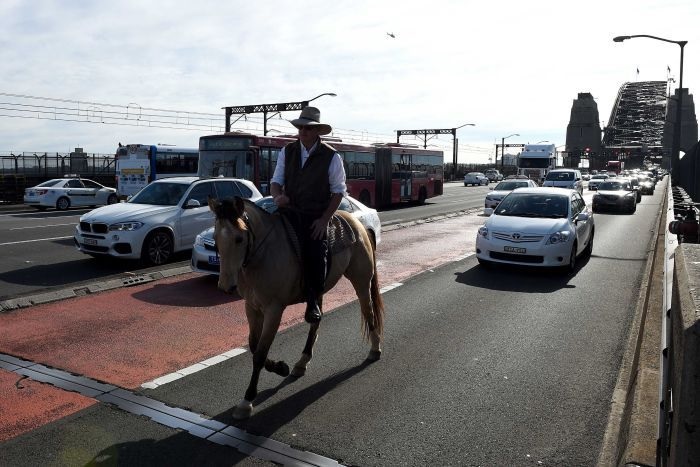 Last month beef farmer Glenn Morris, saddled up and went for a jaunt across the Sydney Harbour Bridge, as bemused tourists and (no doubt furious) motorists looked on.

He was riding to protest vegetation laws being mooted by both state and federal governments, concerned that changes would make it too easy for landholders to clear native vegetation on farms.

“We need vegetation on farms to protect healthy soils and rivers, and yet the State Government plans to allow native vegetation to be cleared more easily,” Mr Morris said in a statement.

The proposed changes have generated tensions (internal and external) between NSW farmers, environmentalists, scientists, governments and communities both regional and urban.

Each group has a tendency to adopt their own uncompromising points of view, reluctant to acknowledge the legitimate concerns of others.

Among these groups are people capable of placing a foot in both camps – these people are worth their weight in gold.

And while some groups and policymakers call for tighter restrictions on land clearing, they would do well to pay attention to the history of prolonged debates over environmental legislation – particularly in scenarios where authorities lack the capacity to monitor what is happening on the ground.

When US lawmakers introduced the Endangered Species Act 1973 they attempted to secure the habitat of the nation’s threatened species, including their iconic bald eagle. If threatened species were spotted on a property, the property became subject to obstructive laws intended to prevent further hunting or deforestation.

It led some landholders to adopt a practice colloquially referred to as ‘shoot, shovel and shut up,’ a sad demonstration of a perverse incentive (a type of negative unintended consequence) at work.

Recognise those doing the right thing

The future success of any reform of environmental law will depend on government – sooner rather than later – engaging farmers and landholders who are already doing the right thing by the planet.

To avoid repeating the American experience, unhelpful “what-you-will-no-longer-be-able-to-do-with-your-land” policies can be substituted with positive language and proposals that offer people a clear benefit.

What seems to be missing from the equation is the proper recognition of farmers, like Glenn, who already dedicate their land and resources to practices which foster groundcover and healthy soils.

What can be done to support these farmers who serve as responsible stewards of the precious native vegetation on their land?  Well, start with celebrating them and amplifying their voice in this debate.

As we know from our work in sustainability, farmer and environmentalist are not mutually exclusive.

Callum is a graduate of RMIT's School of Media and Communications. He is interested in people, ideas and the latest research findings from Australian and world universities. His first job was in the backroom of a butcher's shop and during his time at university, he worked in a number of hospitality roles in some of Melbourne's most well-known tourist destinations.

Food and agricultureScience and environment