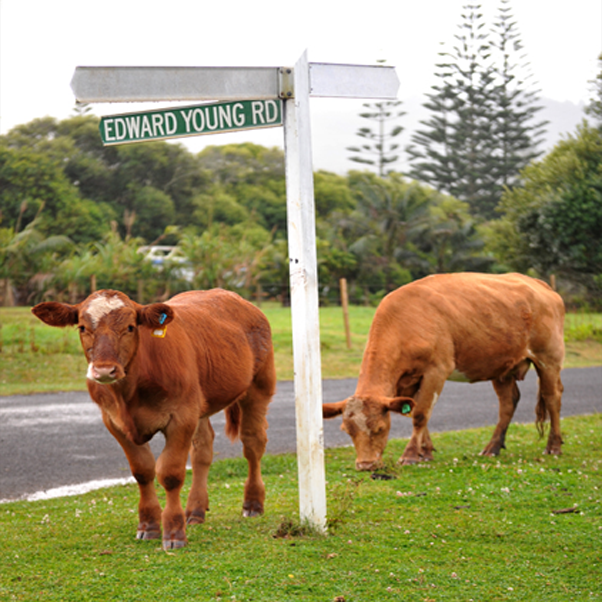 IF EVER a single place captures the essence of a Brand Australia campaign for Australian agriculture it must surely be 21st-century Norfolk Island.

Norfolk might be one of Australia’s most remote territories, yet this tiny outpost punches well above its geographic and financial weight in terms of social and environmental stewardship.

Collaboration, diversity, innovation and sustainability – those traits of a competitive global brand –  are a natural, intrinsic part of everyday life for the island’s 1500 residents and landholders.

This observation was one of the first things that stuck me about Norfolk, a 34-square kilometre speck in the Pacific Ocean, located two hours by air east of Brisbane, during a visit last month.

It was as if the entire island was a living, breathing microcosm of the vision to which Australian agriculture aspires.

For more than 228 years, Norfolk – the ‘Teratri of Norf’k Ailen’, to use its native name – has stood alone, at first by necessity and more recently by choice.

The ingenious self-reliance that enabled the present community’s ancestors to survive on Pitcairn Island and then to prosper after their relocation to Norfolk is evident. However, this independence has in no way compromised social cohesion. The community still cares very much for its own, banding together as volunteers to prepare free-of-charge funeral wreaths from whatever garden flowers are in season and to give Norfolk language lessons in the school, for example, and when the island’s supply ship makes its run north from Auckland once a month, employees step away from their regular jobs to work at the pier for as many days as unloading takes.

Nowhere is this more obvious than in the islanders’ management of their surroundings.

Threatened by colonial-era clearing of its subtropical rainforest habitat, by the early 1990s the endemic Norfolk Island green parrot was hanging on as only four breeding-age females and about 30 males. A rescue program was founded, and parrot numbers today sit somewhere between 200 and 300 individuals, with young birds soon to be introduced to Norfolk’s cat-and-rat-free, uninhabited smaller sibling, Phillip Island. (Indeed, one of Currie’s clients in the scientific sphere, the Threatened Species Recovery Hub, reported recently on the boost rat control on Norfolk had given chick survival rates.)

Phillip is itself an example of extraordinarily successful environmental rebuilding. Norfolk Islanders remember clearly the days in which the sea ran blood-red with mud from Phillip after heavy rain. Denuded almost entirely of greenery by feral rabbits, pigs and goats sent ashore during Norfolk’s time as a penal colony, its soft volcanic soil was highly vulnerable to erosion by both water and wind.

The last vermin, rabbits, were removed by a combination of hunting and myxomatosis in 1988, and since then human-led revegetation and spontaneous regeneration have returned plant cover to much of the island. Rare endemic animals such as the Phillip Island land snail, gecko and skink survive today thanks to this intervention.

Across the main island, too, reforestation is perpetually in motion. There, landholders willingly plant new Norfolk Island pines to replace those that have been logged or lost to natural causes.

“It takes 200 years to grow one of these trees but only a couple of minutes with a chainsaw to cut one down,” islanders say, highlighting their awareness of the need for restraint in harvesting coupled with continual replanting.

While harvesting of sooty tern eggs continues on Phillip Island, it is carried out responsibly – as is subsistence fishing of the sweet-fleshed redthroat emperor (‘trumpeter’) in the waters around both islands. Norfolk’s hunter-gatherers take what they need but no more; with only themselves and several hundred visitors a week to support, they self-regulate to ensure they do not remove more than nature can replenish comfortably.

Norfolk’s primary producers typically generate not only one or two commodities but many, all in complementary fashion: grass-fed meat, free-range eggs and low-input vegetables and fruit (including localised orange and lemon varieties).

The mix of crops and livestock on Norfolk has given rise to a haven of biodiversity alongside an equally healthy appetite for consuming nutrient-rich, locally grown seasonal produce.

Cattle are grazed not only in private paddocks but under paid licence on public land including verges, thereby eliminating any need for roadside slashing.

In no small measure the island’s agricultural success depends on the vigilance of the scientific community, not just on Norfolk but also at the airports and seaports of eastern Australia and New Zealand from which passengers and goods bound for the island depart, as well as behind the scenes.

Stringent quarantine procedures have kept insects from the Australian mainland out of Norfolk’s citrus thus far, enabling orchardists to run their operations efficiently with little or no spraying – a win for growers economically and for the island’s environment as a whole.

Waste not, want not. With the cost of shipping not only to but also from Norfolk sitting at $500 per cubic metre of cargo, islanders have developed a careful retain-reuse-recycle approach to all things material.

Residents separate their waste meticulously so that anything suitable for recycling can be dealt with in the most efficient way. Unwanted glass is added to road base. As a result, broken bottles are an exceptionally rare sight on the shoreline and footpaths. Loose plastic shopping bags and food wrappers are almost never left to blow around the countryside, and aluminium cans are collected for crushing.

Lessons from the microcosm

Make no mistake: life on Norfolk is not without challenges and, to some extent, regrets.

Oversights and misjudgments have occurred – some so serious that they can never be reversed. By the time the value of every single plant and animal to the eco-chain was fully recognised, several species of each were already gone – among them, birds such as the Norfolk Island kaka, used as food.

In this environmentally-aware, one-time frontier settlement, the forces of diversity, collaboration, sustainability and innovation are alive and well and show every sign of continuing to evolve for at least a further 228 years.