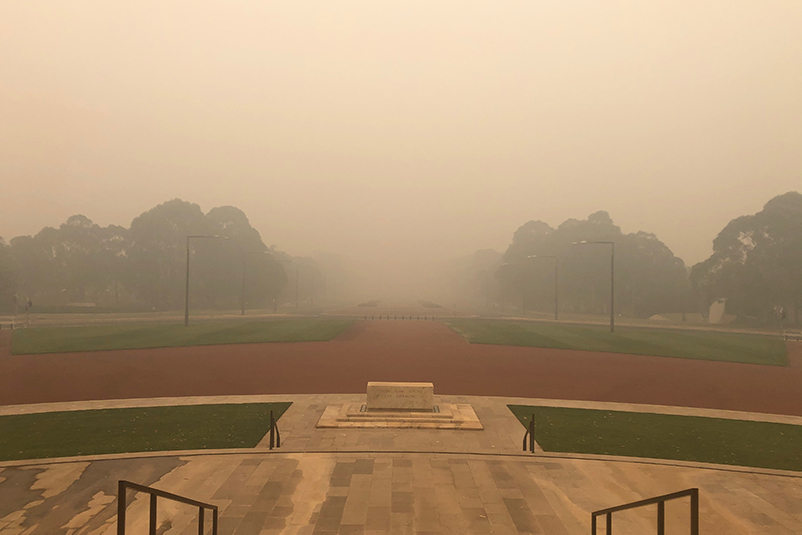 We wake to an eerie silence and a thick blanket of smoke covering our city. No birds chirping, no laughter out on the street from kids playing. We have had weeks of being blanketed in smoke already, but this was different. This level of smoke was so hazardous that it was off the charts. Visibility was only a couple of hundred metres. New Years’ Day park runs were cancelled. Everything was cancelled.

This was not the new year we were hoping to bring in. There was no celebrating. It was hard to express hope and joy and goals and dreams for the year ahead. We were thinking of friends and family directly impacted by the fires. Of a lost summer of camping at the coast. Of lives and homes lost, estimates of over one billion mammals, birds and reptiles affected, entire landscapes.… gone. Of the sick feeling in the pits of our stomachs.

Unprecedented is a word we have seen a lot in the media reports in the last couple of months. Unprecedented bushfires across nearly every state and territory, causing unprecedented costs and damage, both economic and social. Unprecedented drought wreaking havoc with our agricultural industry and water supplies. Canberra had an unprecedented hailstorm, destroying years of the CSIRO’s research. Unprecedented heat and dryness, with 2018 and 2019 being Australia’s hottest and driest years on record. The bushfires led to a staggering estimated one billion animals lost, with immediate concerns for a number of iconic species, including the koala, quokka and platypus.

We knew about this

As someone who has worked in the environmental sector my whole career and been convinced about the evidence of climate change ever since I learned about it at university in the early 2000s, I have felt deep anger this summer. Anger that we have known for decades about climate change and what the impacts would be, and that action has not been taken.

Many will have seen the excerpt from the Garnaut Climate Change Review (2008) in the media in recent weeks. I vividly remember reading it at the time. It stated that “fire seasons will start earlier, end slightly later, and generally be more intense. This effect increases over time, but should be directly observable by 2020”.

At the time, 2020 seemed so far away. And yet, here we are, 2020 and the effects are indeed clearly observable. And we are only halfway through summer.

What will it take?

A few years ago I came to the conclusion that it would take climate change directly impacting our communities for real change to occur. We couldn’t get a much clearer signal about the impact of climate change on Australia than we are experiencing this summer.

So, now that impacts have been directly felt, will it lead to that much needed change in policy and action – from government, business and our community?

I’m not sure. But it can and it should. We have the tools at our disposal to change the trajectory – one that is tracking far above the Paris Agreement of 1.5 degrees above pre-industrial levels. A new UN report indicates planned emissions of greenhouse gases to 2030 are 53% higher than what is needed to limit warming to 2 degrees. Indeed, with our current policies in place we are tracking at about 3.0 degrees Celsius warming (though this varies depending on the modelling and analysis you read).

These are sobering statistics, knowing what we know about the impacts of warming of more than 1.5 degrees. The UN has recognised climate change as the “defining issue of our time”, and has called the crisis “the greatest challenge to sustainable development”.  The CEOs of the world’s biggest companies have named climate change as the key global risk for business (and the world).

So, in 2020, what can we do? How do we look to 2030 and have hope? What can businesses and communities do? Is there hope for our children?

As a pragmatic optimist, I say yes and other commentators agree. But it involves more than being angry. More than being disappointed. More than hoping for policies (or politicians) to change. It has to do with action. Real action, both our own, our communities’ and our businesses. It is also likely to need new technologies.

What can we do?

Some practical things that we can do:

These are just some ideas of how we can live more sustainably and make better choices. There will be others, and these suggestions do not negate the need for broader action and investment in new technologies if we are to aim towards limiting global warming to 2 degrees.

Let us help you

Currie is committed to helping people and organisations that sustain life on our planet.  So, if you’re not afraid to lead difficult conversations about complex problems that we need to solve together, let’s talk. We turn visions for sustainable development, including action on climate change, into strategies and stories that make sense.

It’s one of the reasons why we’re a proudly-certified B Corporation (BCorp) — a company that uses the power of business to solve social and environmental problems.

Liesl brings together the human and social in sustainability planning and engagement. Her work in both the private and public sectors has spanned a range of fields including renewable energy, water policy and planning, urban and social planning, infrastructure development, and community engagement. Liesl is a change-maker in the true sense of the world. She brings energy and commitment, and she utilises a best practice approach in the work that she does. She believes climate change is real and impacts on every facet of planning for the future. Liesl is committed to sustainable planning for people and the environment, bringing her skills in systems thinking, diplomacy and insight to drive for change.

Science and environmentSociety and education