Lighting a flame under the SDGs - Currie 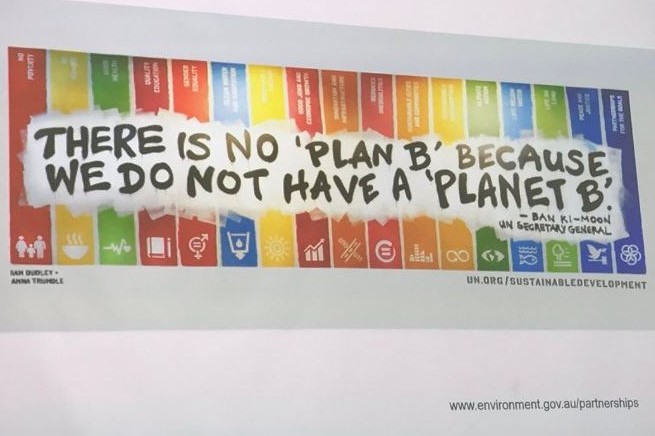 This time last year we asked if Australia was on-track to hold up its end of the United Nations Sustainable Development Goals (SDGs).

A few months later a report from the Monash Sustainable Development Institute (MSDI) gave us an answer. It concludes that Australia’s progress on the SDGs is mixed.

Banksia Ignite aims to promote Australia’s understanding of the SDGs and recognise the innovative organisations and partnerships which are taking action on the SDGs.

It’s hosted by Currie’s sustainability partner, the Banksia Foundation, at the Museum of Contemporary Arts during the annual Vivid Sydney light, music and ideas festival.

For those of us lucky to attend there were shining examples of sustainability action and words of wisdom which provide a glimmer of hope for Australia and the SDGs.

Many of the examples highlighted the power of partnerships to the SDGs, including:

The Banksia Foundation is a sustainability institution in Australia. For 30 years the non-profit has been convening awards and events where people share stories and celebrate innovation.

Here are a few wise words in the sustainability stories shared at Banksia Ignite.

“’Australia’ is a good word to use when defending penalty rates but not when campaigning for asylum seekers.”

– Peta Granger LUSH Cosmetics, sharing what she learned about messaging from research by GetUp during a panel on SDG10 – Reduce inequalities

“The most sustainable wardrobe is the one you already have. Get creative with it.” and “The definition of luxury is something that is worth repairing.”

“Consumers are demanding sustainable seafood and companies are starting to build these into the DNA of their brand.”

– Alexander Webb, Marine Stewardship Council, on a panel for SDG14 – Life below water. It’s extraordinary to hear that 95% of the world’s oceans remain unexplored.

“We have lots of people who contemplate, ideate and consider. To design is literally to designate. Without design we cannot make progress.”

– Laura Ryan, Mentally Friendly, talking to SDG3 – Good health and wellbeing; on the importance of design (and creative minds) in meeting the SDGs.

In the end we were challenged by the winner of 2018 Banksia Awards – Individual category, Darcy Lunn, Teaspoons of Change, to be “global citizens”: “It’s the little things each of us do in our daily lives that, combined, will create a better world for everyone, everywhere.”

The last word came from a force of nature in sustainability, Banksia CEO Graz van Egmond: “Let’s go forward, together, with passion, leadership and innovation on the SDGs.”

At Currie we share this passion, assisting leaders in business, science, government and society to look ahead, engage people and tell stories that inspire progress on the SDGs.

That’s why we’re a proud supporter of Banksia Ignite and the Banksia Awards.

Giving voice to those who seek a kinder, safer, fairer world