No absolution without confession 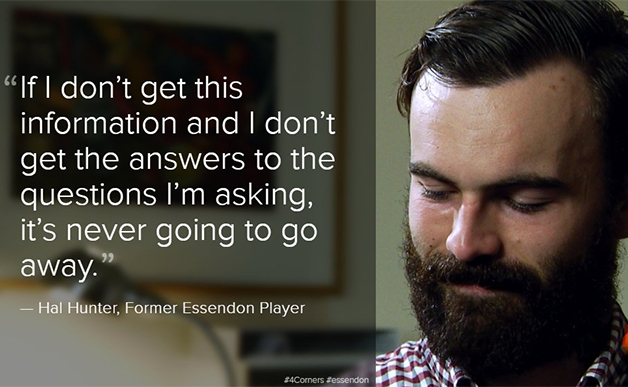 If you don’t apologise and admit you were wrong, you’ve taken the wrong exit and before long your PR strategy will have gone too far south.

We’ve gone well past the point where writing about the Essendon Football Club’s supplement scandal is like dancing about architecture. Really awful architecture that you hate.

But every now and then, the media’s attention takes a turn towards the heart of the issue — that after more than three years, Essendon still cannot tell us what was injected into the 30-odd young men in their care.

The most recent example is this week’s 4 Corners, “Whatever It Takes”, on former player Hal Hunter’s battle to find out just what was in the supplements he was directed to take.

Ignoring your most important stakeholder

While the program contained little, if any, new information, it was yet another hit to the reputation of Essendon and a reminder of what happens when your public relations strategy for your most important ‘stakeholder’ (the players) is no more sophisticated than a hashtag (ref: #BackOurBoys; #MakeAStand et al.)1.

A Catholic education may not have taught me much, but it did teach me that there is no absolution without confession, without penance.

To date, Essendon’s only confession has been to issues of process rather than not knowing what they injected into the 30-odd young men in their care2. A lack of knowledge that not only sees the players suspended for a year, but also battling depression and anxiety.

This is the primary issue – and one that Essendon’s PR strategy has consistently failed to address.

And it is not as if they have not had the opportunity.

When the AFL’s chief medical officer warned of an increased cancer risk to players as a result of a supplement program that was carried out at the club, what did the club do? They labelled the medical officer as the” irresponsible party”. There’s not enough common sense or decency there to feed the fish.

It does nothing but demonstrate they hadn’t entirely grasped that injecting 30-odd young men in their care with substances they are not aware of was the more irresponsible act — one borne of malfeasance and not concern.

More concerned about the ‘brand’

Instead, the club has displayed a white-hot sensitivity to criticism, one that has suggested the club is more concerned about its brand than it is about the 30-odd young men in its care.

Having your PR openly criticising a media outlet for taking a stand you don’t agree with? That’s a fool’s advice you wouldn’t take to cross the street.

While the information on Hal Hunter’s case against Essendon has been in the public domain for some time (he is seeking documents from the club to establish what he was injected with) it provided a timely reminder on how poorly Essendon has handled (and continues to handle) the matter.

The only defence is that Essendon’s pursuit of Hunter to cover the costs of its defence indicates the club’s PR is not in the room while these decisions are being made – hell, they’re probably not even as close as the car park.

If they were in the room, they’re no better than the masses of AFL supporters who will feast upon whatever slops the club dumps into their trough3.

My personal view is that Essendon’s PR strategy is simply cheap plastic jewellery accessorising its legal one. That’s an indictment on the club, more so than those proffering PR advice.

But until the club has a change of heart, confesses it did wrong by the players (to the players) and pays its penance, the hits to its reputation are gonna keep coming.