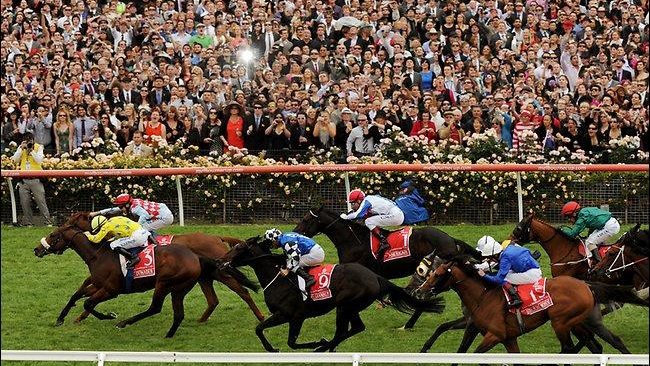 Shoes are off, ties loosened, fascinators askew. A St John’s Ambulance cart winds its way through the straggly crowds, carrying some bloke with an overly optimistic sense of his carrying capacity.

Most disturbing though are the repeated incidents of casual racism as the evening wears on.

Within a few minutes I overhear two separate conversations about ‘wogs’ and ‘bloody Asians’. People within earshot accept these casually racist remarks without question. There’s no shame from those uttering them – no lowered voices or qualifying statements (I’m not racist but …). In vino veritas.

My friend and I chat with an elderly man. In heavily accented English, he compliments us on our outfits and we discuss the vagaries of the crowd. Nearby, a group of young Africans joke and laugh, their good spirits infectious.

Except to our new friend.

“They should never have been allowed in – they’ll never understand our standard of living.”

I beg to differ. The man listens to me indulgently, but clearly disagrees. I point out that he is an immigrant. “But I’m white” – not his exact words but a direct translation.

Fortunately our train arrives before I hit him over the head with his cane.

We get off the train in East St Kilda. Someone in the crowd ahead comments on a tree full of noisy birds – “What a racket – must be Jewish parrots”. Howls of laughter follow.

I make it home, slightly shell shocked. In under an hour, I hear four hideous, openly racist remarks. Clearly not one of these individuals expected those around them to be offended.

This week’s events in the US and the apparent widespread endorsement of Donald Trump’s proudly expressed racist views, have made me wonder how much hope there really is for us humans on this front.

Australia’s own refugee policies are another case in point.

Racism is learned. A couple of years ago, I took my young nephew to see Hairspray, an uplifting romp through the ‘60s civil rights movement. He was most puzzled by the story.

“But why didn’t they like people with brown hair? We’ve got people in our family with brown hair and we like them.” He hadn’t even noticed the skin colour of the actors. Perhaps there is some cause for optimism.

Anyone who believes racism is natural and not learned should watch Blue Eyed, a powerful documentary about mid-west primary teacher Jane Elliot, who, following the assassination of Martin Luther King in 1968, ran exercises with her grade-three pupils to teach them about discrimination.

Like the inspirational Jane, we can’t give up. We’ve got to be aware of unconscious racism in ourselves, call it when we see it in others, and use our own votes to fight discriminatory policies.

I’m proud to say that my scarring Saturday night in racing season was followed this week by Currie’s commitment to the UN Global Compact. Principle 6 <https://www.unglobalcompact.org/what-is-gc/mission/principles> pledges to call out discrimination in respect of employment and occupation. Over 9000 companies have signed up to the Compact, so there’s many in the good fight.

And Trump – well his values are different. But at least he appreciates hairspray.