The value of keeping it real - Currie Communication 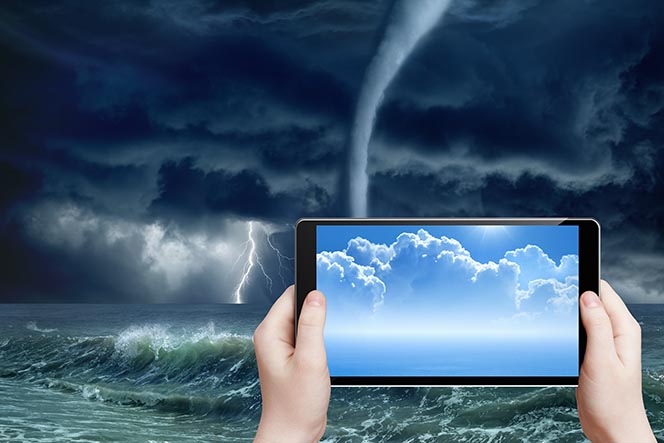 “Reality is merely an illusion, albeit a very persistent one

We’ve used this quote from Albert Einstein during media training with clients.  It seeks to explain that a person’s perception of reality is what we’re working with during a crisis – not the reality itself.

It’s the same for myths. It doesn’t matter that they may be fiction. What matters is how people use myths to form a narrative that makes sense to them. What really happened takes a back seat.

So, when people describe journalists moving into public relations as “crossing over to the dark side” they may be right. Perhaps a job which works with illusions and myths is dabbling in the dark arts, after all.

Yes, reality is illusory and the digital age makes it more so. Of this we were reminded during a visit to the virtual reality lounge hosted by Deakin University at Melbourne Knowledge Week (#MKW2016).

It was here we discovered how a cardboard box can be used to transform a smart phone into a fully-functional virtual reality (VR) headset. The digital technology enabled us to visit unique locations and get a taste of the potential VR has in overcoming economic, physical, social and geographical boundaries.

At #PauseFest2016 VR was described as ”the new wild west”. However, Chris Panzetta from tech agency S1T2, stressed the need for placing storytelling first and technology second when exploring this frontier.

Beyond VR there’s augmented reality (AR). Here’s how The New Yorker uses it to engage people once they’ve captured their attention.

An iPad enhances a poster through augmented reality at a CCRES conference.

An iPad enhances a poster through augmented reality at a CCRES conference.

We work with scientists who use this technology to tell deeper stories about their research of coastal ecosystems, using an iPad and a poster.

The iPad’s recognition of an image in the poster (pre-programmed with AR software on the tablet) prompts the playing of a 3D video.

So, the illusion of reality we’ve had no trouble forming before the age of digital innovation is now more illusory than ever.  VR and AR widen the gap between what is real and what we sense is real.

With 90% of the world’s data created in the past two years (another #PauseFest2016 insight). The temptation for us to use reality-distorting technologies to make content stand out is overwhelming.

Yet, as Grant Miller from Ingenuity Studios warns, people will much rather experience a room with a cardboard box than immerse themselves in a virtual world that stutters due to poor execution of VR. As with any form of storytelling, Grant says, we much prefer authenticity above all else.

It’s a similar sentiment to one which emerged from last month’s meeting of our @PRGN colleagues in Washington DC where the takeaway messages covered the relationship between technology and storytelling.

Storytelling requires authenticity and empathy. It must make sense and seem right; not forgetting that reality is subjective, created by the power of myth, the force of memory and our need for hope.

Regardless of whether virtual reality one day creates the ultimate empathy machine or not, our understanding of an audience’s view of reality is what will determine whether our stories seem authentic.

Yes, reality (digitally-enhanced or otherwise) is an illusion. As we say during crisis media training: “Reality doesn’t bite, rather our perception of reality bites (…and sometimes it’s poisonous).”